At Table Mountain Inn, you’ll find the spirit of the West, the splendor of the Rocky Mountains, and warm western hospitality combined in one extraordinary adobe-style boutique hotel. Our traditional southwestern decor and modern amenities provide an ideal home away from home . 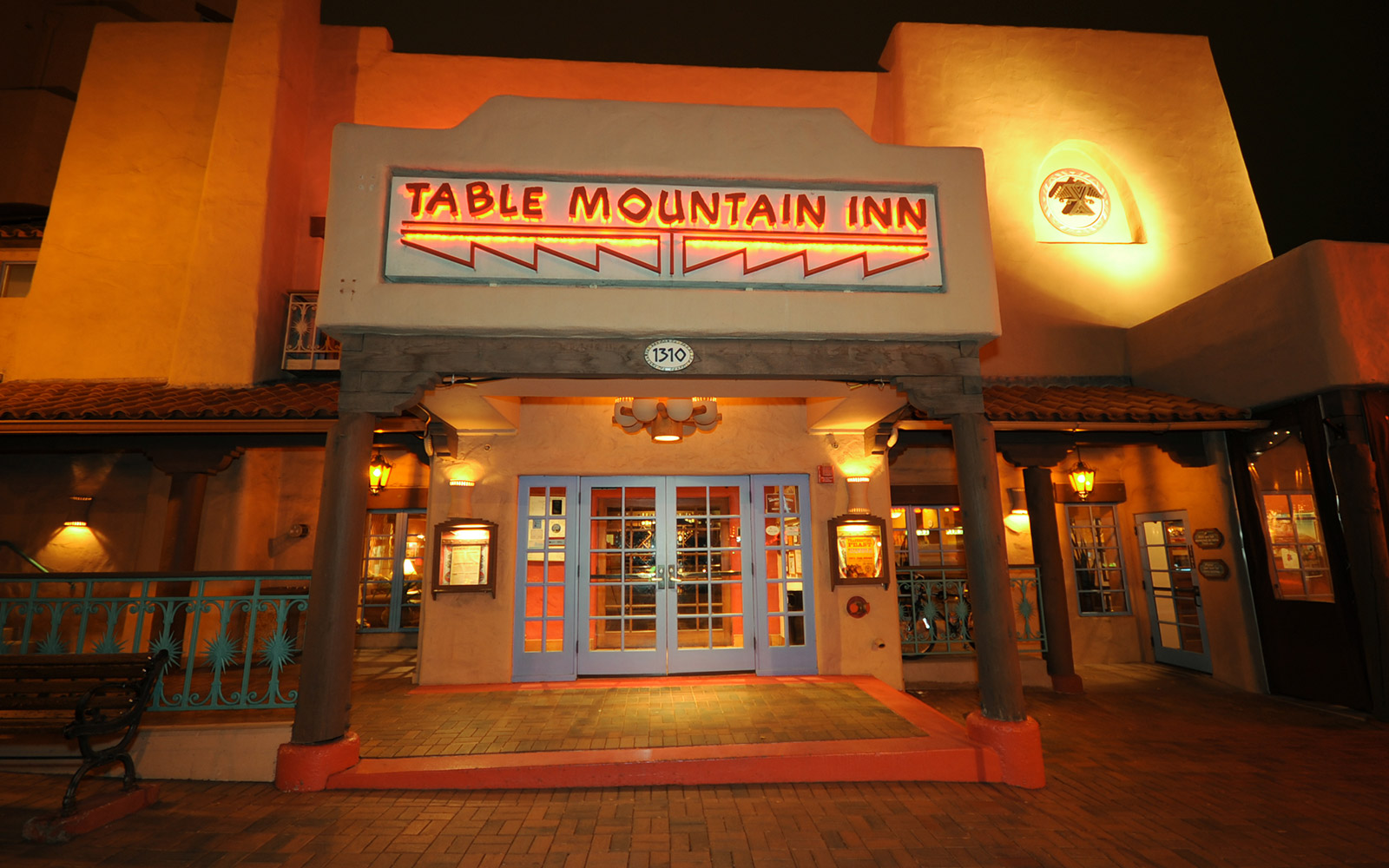 Table Mountain Inn as we know and love it today has undergone numerous changes in ownership, style and dimension since it first opened in 1925 as the Hotel Berrimoor*. The Berrimoor was built by entrepreneur Robert Berry with the intention of being a modern “up-to-the-minute” luxury hotel to be the pride of Golden. At the time, the hotel offered 32 rooms and a coffee shop. The Berrimoor only lasted a few years before depression came into full swing in Colorado in the early 1930’s, but the hotel was only dark for a few years before entrepreneur and hotelier, Edgar P Sparks, purchased the property and brought it back to life under the name “The Cody Hotel”. Mr. Sparks chose the name to honor Colonel William “Buffalo Bill” Cody whose grave and memorial notoriously reside at Golden’s own Lookout Mountain. Unfortunately, the times could not support The Cody Hotel either, and the property once again closed then sold, with numerous ownership, name and style changes (including a brief table in Art Deco!) over the next 6 years. 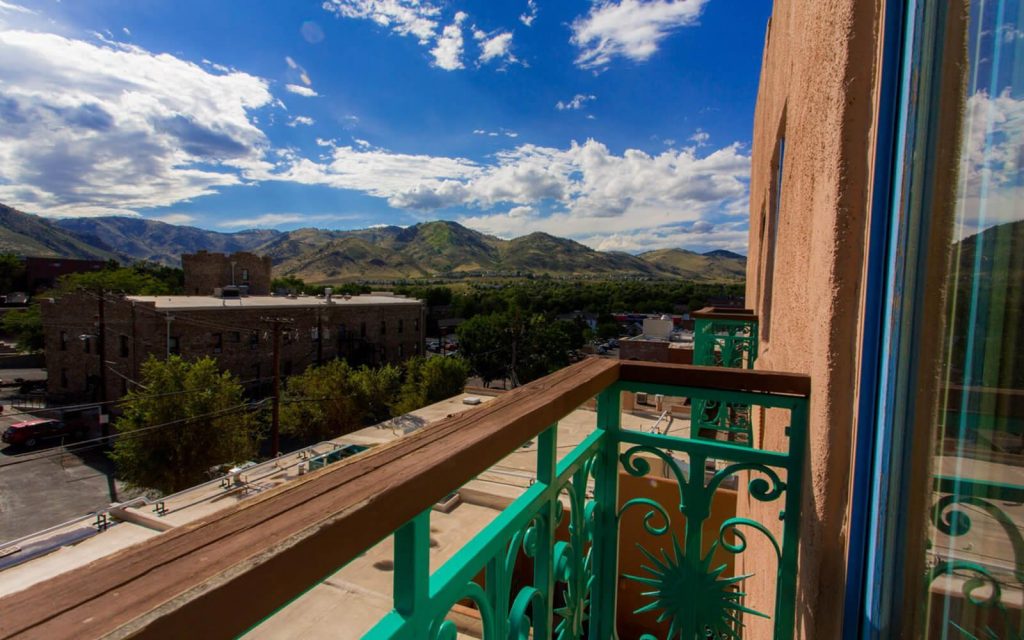 Thankfully, civic leader, businessman and former Golden Mayor, Lu Holland came to the hotel’s rescue in 1948 reviving the property and renaming it “Holland House”. Mr. Holland’s first order of business was a renovation during which he created two banquet spaces. These spaces would come to host some of Golden’s finest social functions and have been immortalized in Hal Shelton’s “The Birth of Golden in 1958” mural. 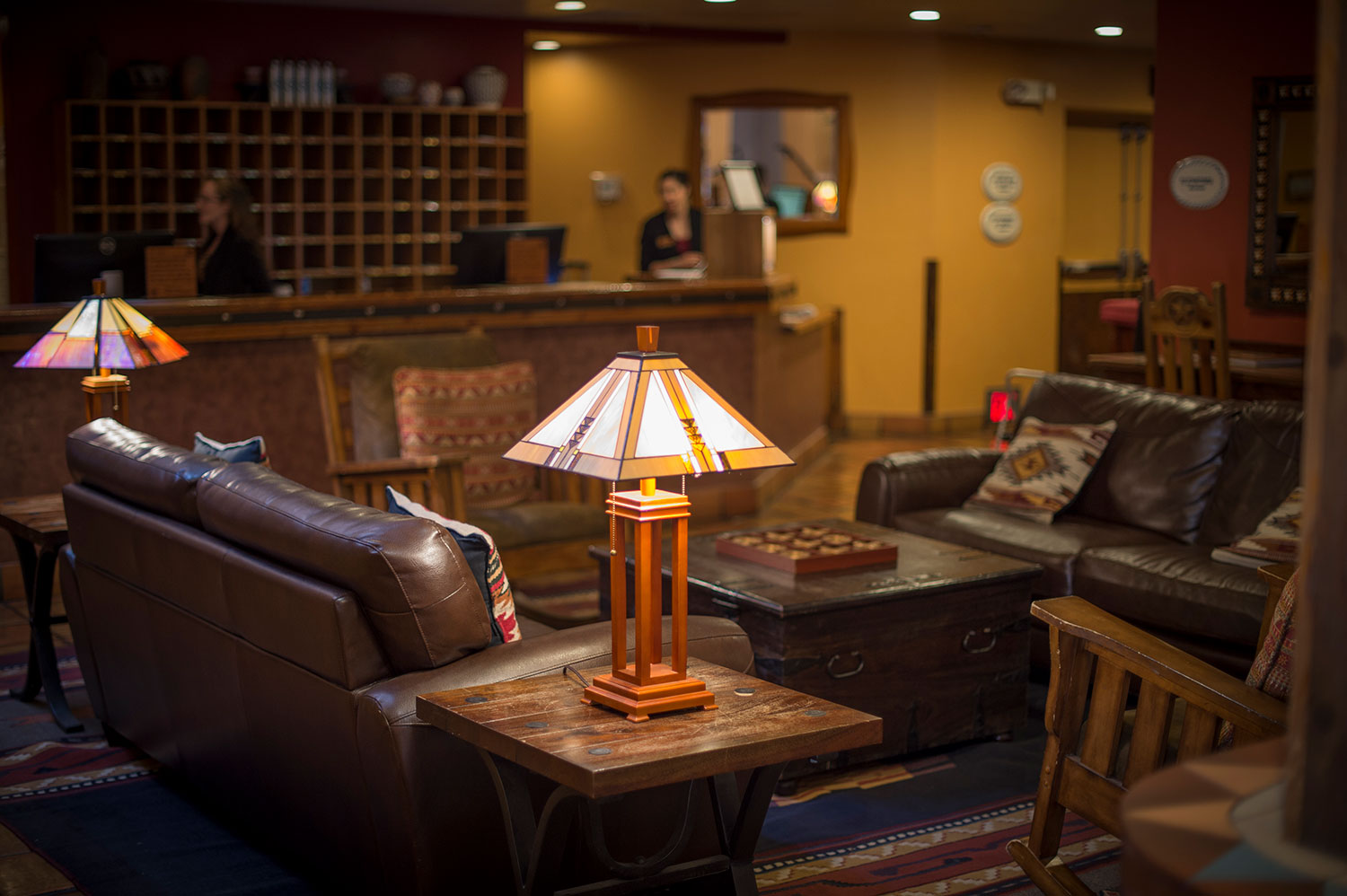 In 1963, as the automobile industry was experiencing its first boom, the Holland House re-invented itself as Golden’s First Motor Inn. For the next 24 years the Holland House would become synonymous with Golden. The revitalized hotel became popular throughout the Denver metro area not only as a great place to stay but also for the food served at the Holland House Coffee Shop.

Unfortunately, Mr. Holland retired in the early 1980s, and hotel could not survive under any of the new owners and in 1987, the Holland House closed its doors altogether. Golden feared that it had lost its only real hotel.

In 1991 a team of very successful restauranteurs were sitting across the street enjoying coffee at what is now Woody’s Wood Fired Pizza, looking out at the former Holland House building, when they decided to “make a go of it”! 56 years after the building had opened as Hotel Barrimoor, Bart Bortels and Frank Day would give the landmark building the greatest overhaul Golden had seen, and they created Table Mountain Inn. The exterior was stuccoed, the rooms were gutted and completely rebuilt and the lobby and restaurant were recreated resulting in the elegant Southwestern décor now iconic of Table Mountain Inn. For the next 7 years the hotel would experience great success with its 32 rooms, lounge and restaurant. It was great… But as they say, it can always be better. In 1999, Table Mountain Inn built an addition to the building which added 42 rooms, guest parking and additional indoor/outdoor event space, thus solidifying Table Mountain Inn as THE place to stay and dine in Golden. 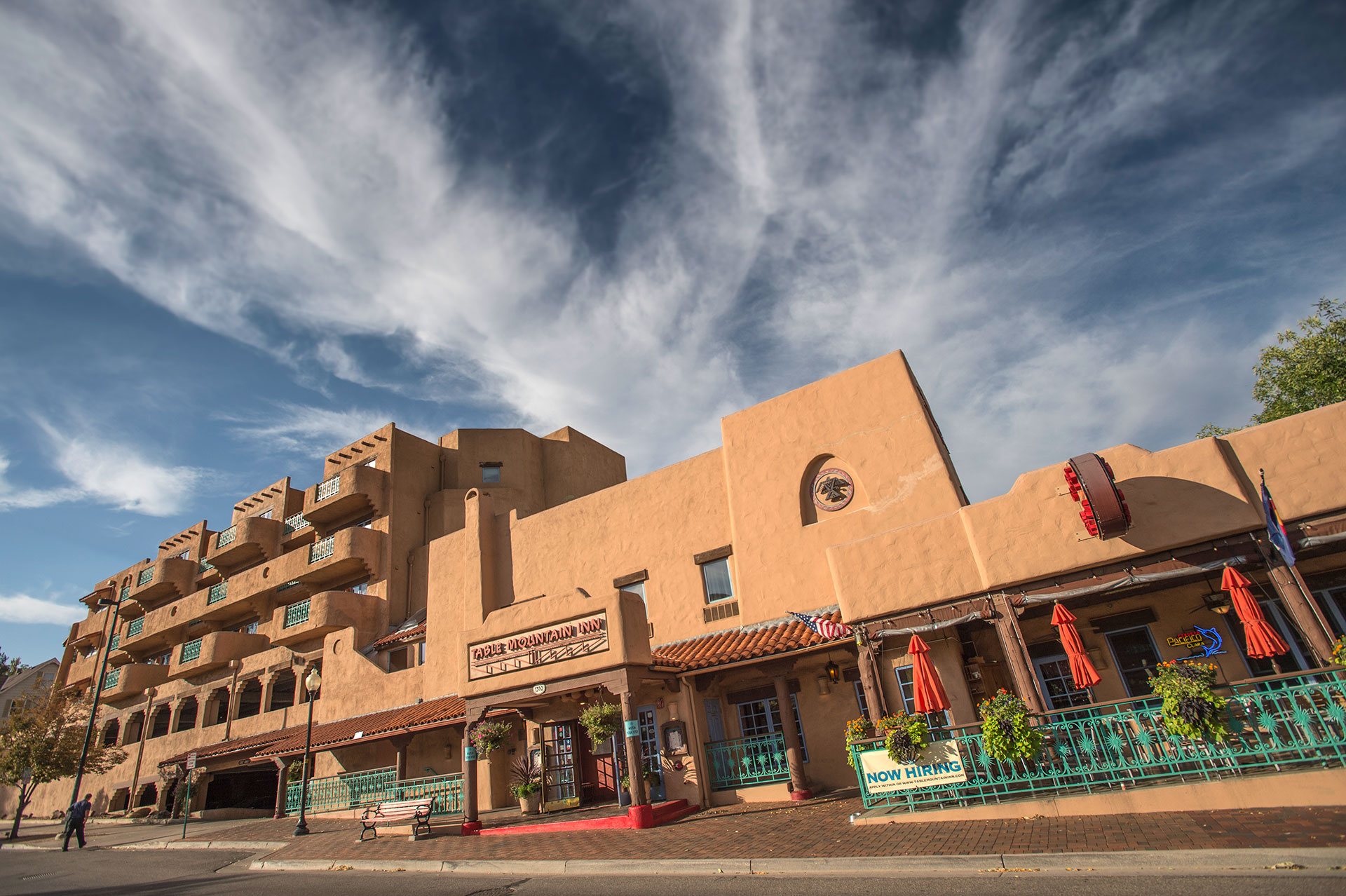 From its Spanish Style to its Western Elegance, Table Mountain Inn has come full circle from its origins. Table Mountain Inn is a hotel where nothing has been overlooked for the convenience and comfort of the guest and a hotel of which the city of Golden can be proud!

What Our Guests Are Saying

“Staff is most cordial. Love the balconies. The restaurant is outstanding, especially breakfast. Good location for shopping and restaurants. We enjoyed out stay. I forgot my cell phone charger and they called me immediately before we left town.”

“Start to finish, this hotel has it all. Great bartenders, amazing food, clean room, and awesome location. Fantastic stay!!!”

“Stayed here for 4 nights during a conference. Rooms were clean, comfortable, and the staff was exceptional.”

“Love Golden and the Clear Creek Trail, and of course the Table Mountain Inn. Stay in the Foothills Grand King where you can look up at LookOut Mountain”

“Food here is always terrific as are the wine selections. Rooms are comfortable and inviting with great views of the mountains surrounding Golden.”

“This hotel had everything I could want. It is very fitting to the town; neat, simple and clean. You can walk everywhere from here too. I especially liked the lobby area, very welcoming and warm place to hang for a bit. ” 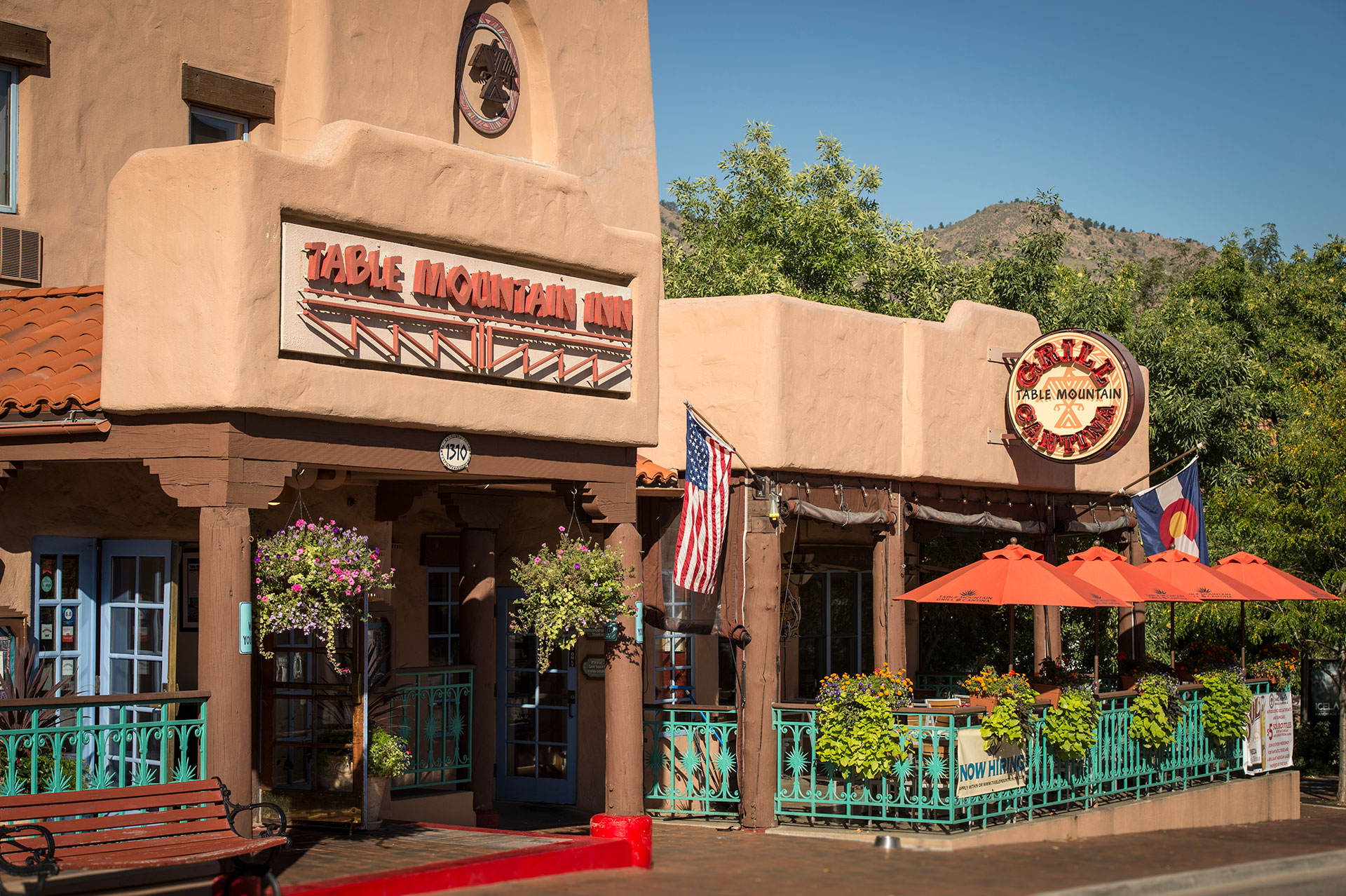 Located in the heart of downtown, Table Mountain Inn is a landmark in historic Golden, Colorado. Experience the Southwestern Charm and beautiful mountain views within our adobe-style boutique hotel. Guests are welcomed with Western hospitality as they enjoy our spacious accommodations with modern amenities.